With the ever-growing increase in mobile phone usage, it has become more important to increase the battery life of the devices to ensure user satisfaction. A large part of the battery consumption and network usage of these devices comes from video streaming applications. Some of the most popular being from Netflix, YouTube, Amazon Prime Video and Twitch for video streaming applications. Reducing energy usage and network usage of video and streaming applications is a major point of emphasis in the mobile world and is vital for both consumers and developers. When looking at this trend from the standpoint of battery life, mobile platforms must conserve resources to improve the battery performance and user experience.

We advise developers on how to make users aware to consume a stream with lesser quality, or we advise developers to put the default settings in a so-called battery saving mode. To reduce the battery life of the device one can simply choose to consume the stream with a lower quality. The benefit of this is that the battery life of the device will be saved and less internet data is consumed. However, a trade-off is that the quality of the stream is poor and this can affect the user experience. A hybrid solution could be provided which selects the best available quality based on battery level. The reason why we chose to focus on the developer and the user is that the developer wants a user to consume the application as long as possible since the payment model in most of streaming apps are advertisement based and thus it is self-explanatory that the longer the user will stream the more the developer will have profit. In addition a user benefits from energy conservation by streaming longer and paying less for the energy bills in the long term. Moreover the user will benefit from reducing network usage and thus pay less monthly bills to the internet service provider.

In our experiment we have two applications - YouTube and Twitch. These two mobile applications use similar streaming technology. However, integrated and complicated applications like this would contain lots of API indicators and third-party services. We separate them into different blocks and make no comparison between them. Below are the summary statistics for each block.

We choose YouTube as the mobile application. The experiment estimates the power consumption and network packages during the video plays. We set different qualities, which are provided in YouTube (360p, 480p, 720p 1080p).

We can see from this table that the minimums and the maximums are increasing with the quality. 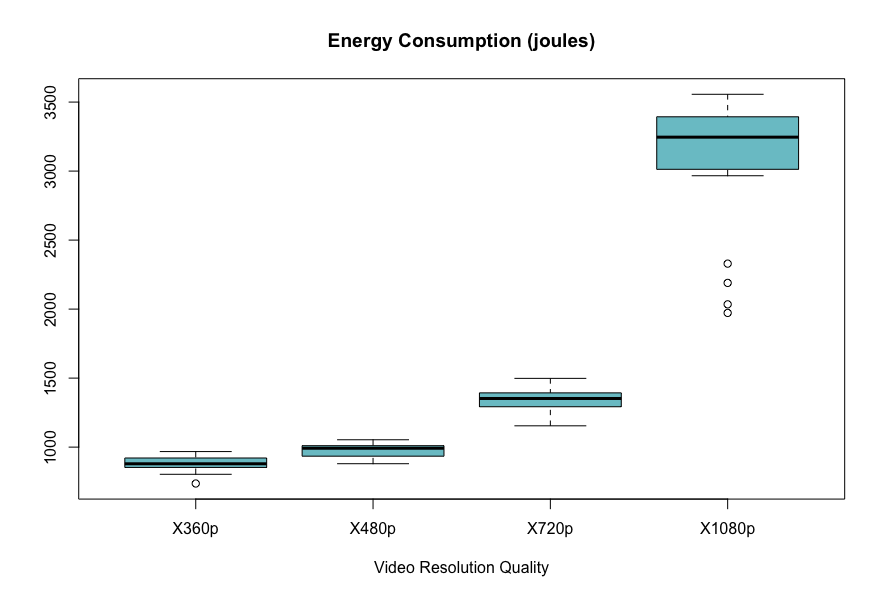 To better visualize this trend, we create the box plots. 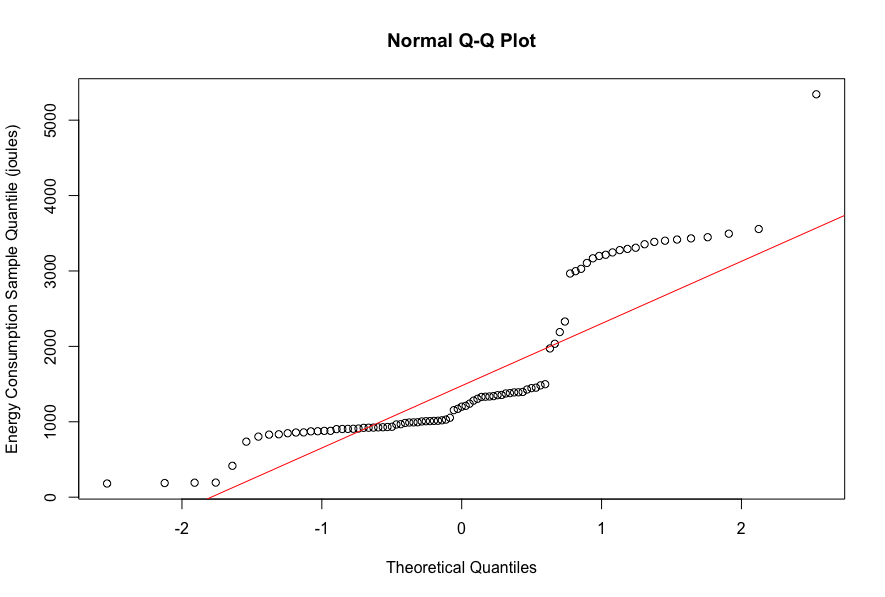 According to the Q-Q plot, we can observe that most of the values are not following the straight line, so the data-set is not normally distributed.

We also use the Shapiro-Wilk test to check the normality. The p-value is 2.254e-09, which is less than 0.05, hence we reject the distribution hypothesis and accept that the data is not normally distributed.

As we mentioned, the third-party services and other API indicators during the video playback is tricky to follow. Hence, the filter in our network capturing tool does not specify the destination or source as YouTube. This filter will capture all the relative packages, including the third-party data. Otherwise it would make our transferred packets much larger than usual. We decide to perform the data reduction by reducing the packages when not using YouTube. The reduction’s amount, called idle packets, is the transferred packets when the phone is idle.

The table illustrates the packets size during the video plays under different quality settings in YouTube. 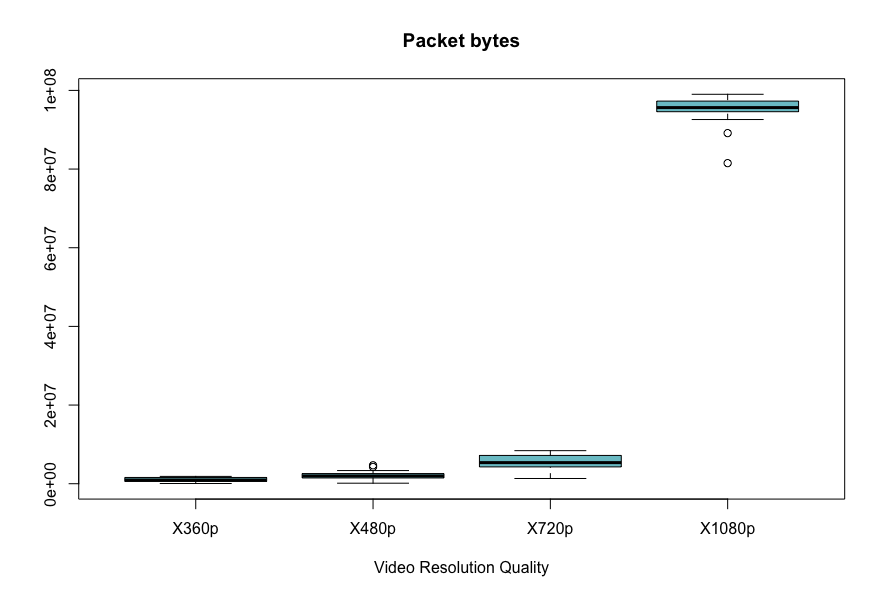 We also use the Shapiro-Wilk test to check the normality. The p-value is 3.428e-09, which is less than 0.05, hence we reject the distribution hypothesis and accept that the data is not normally distributed.

For Block two, we choose Twitch as the mobile application. The same experimental design as block one will be applied since we separate these two applications for different features. The features will influence the results of the experiments but not the processes. Twitch also provide the quality settings as 360p, 480p, 720p and 1080p.

We apply the same plots as block one since the similar methodology fits for both applications. The table illustrates the energy consumption under different quality settings in Twitch. 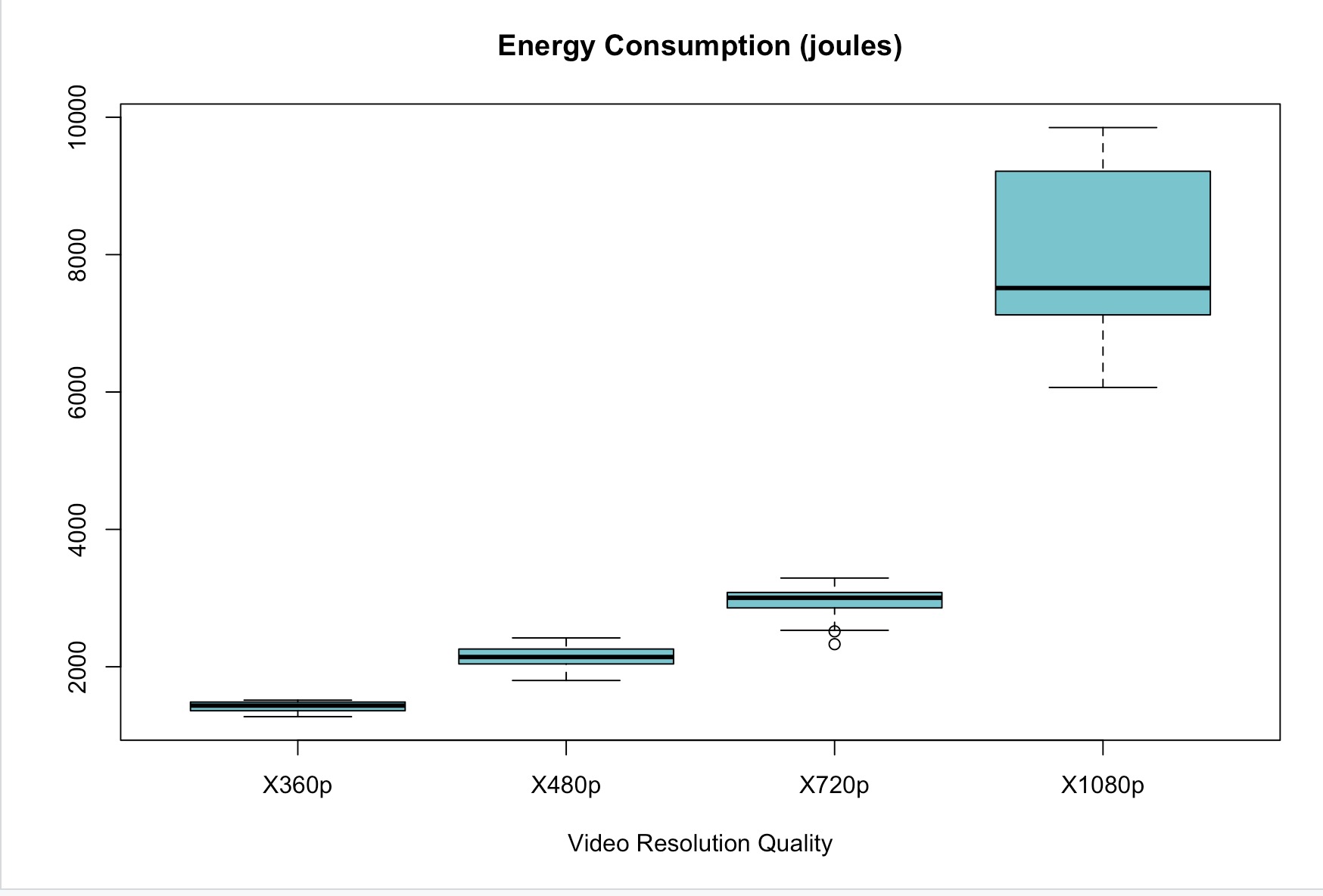 The figure shows the box plots of the energy consumption of the Twitch app.

We also can see from this table that the minimums and the maximums are increasing with the quality. So we create the box plots to better visualize this trend. 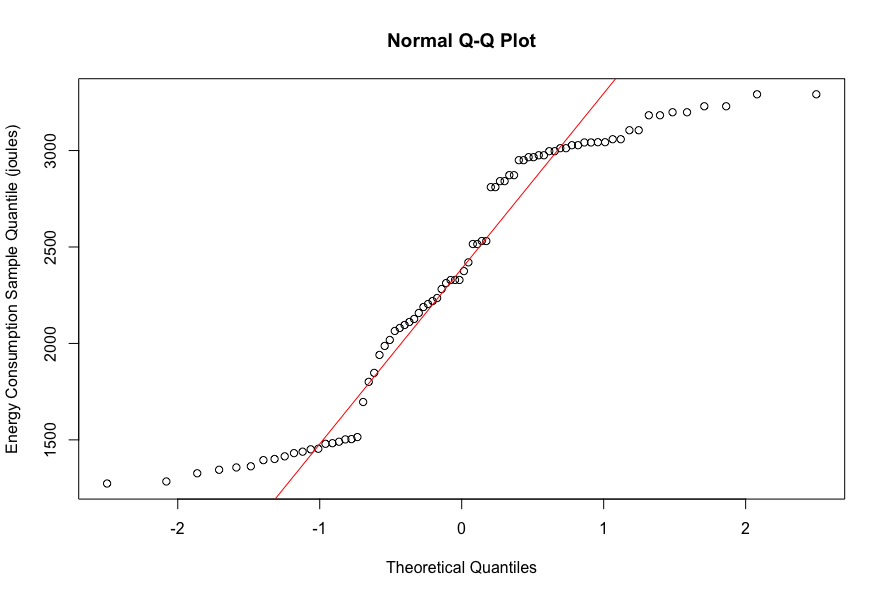 From the Figure, we can see that the dataset is not normally distributed.

We also use the Shapiro-Wilk test to check the normality. The p-value is 7.474e-06, which is less than 0.05, hence we reject the null hypothesis and accept that the data is not normally distributed.

The following table illustrates the packets size during the video plays under different quality settings in Twitch.

Network traffic in Twitch is quite similar. And to avoid redundancy, we will focus on the trend we observed in this experiment. The increasing trend of network traffic with the quality settings is evident. Each dataset with different streaming qualities is distinct from others. There is no data overlap between these datasets.

We also use the Shapiro-Wilk test to check the normality. The p-value is 2.576e-09, which is less than 0.05, hence we reject the distribution hypothesis and accept that the data are not normally distributed.

There are some noises and outliers in our experimental data. For the extreme noise such as non-positive packets’ number or size and non-positive energy consumption, we cut off these data for data cleansing. These data are collected incorrectly in the procedures, probably in AndroidRunner or WireShark. And for some outliers like low consumption and low network traffics in a 1080p quality setting, we keep this for these two reasons. First, the data can be correct since some video playback can be short and do not have any advertisements. Second, the data plays a crucial role in statistics analysis for rejecting the null hypothesis. We can not remove them because they might suggest no impact on the consumption or network traffic under different quality settings.

From the previous analysis, the distribution of power consumption and network packages are not from the normal distribution. The distributions are similar in both Block One(YouTube) and Block Two(Twitch). We apply the non-parametric test based on our experiment design for both Blocks. For the test selection, since the dependent variables(energy consumption and network traffic) are tested in different situations with different levels of qualities, we use the Kruskal-Wallis non-parametric tests since they fit most in this test.

Our experiment’s target is mainly for the users to know the impacts of quality settings on energy consumption and network traffic. Below is some information that helps users to choose quality settings.

The gaps among the quality settings

The trend shows that video playing under higher quality settings has more impact on the energy and network. The result means it cost more when users switch from 720p to 1080p than switch from 360p to 720p.

The network traffic remains roughly the same during video playing time. The preloading algorithm of Twitch and YouTube might be the reason for having heavy network traffic when frequently changing videos.

In this experiment, we do not subscribe to any paid services. The advertisements become unstoppable according to the algorithm of the applications. However, we can see specific pop-out advertisements that YouTube plays do not show in the low-quality settings(at 360p or lower). This fits the service in the YouTube interface as the “saving mode”.